Saab cars are still stuck between life and death. The Swedish carmaker has been in crisis since April 2011. After several twists and turns, there has been no improvement. Now, many analysts believe that even if they can achieve complete cooperation with Chinese partners, their future will have great instability.

However, Volvo Cars, which is also the representative of Swedish cars, started a new campaign in China. After being acquired by Zhejiang Geely Automobile, Volvo Cars began to recalibrate its brand positioning. The "human-respected" brand slogan indicates that Volvo's brand strategy has shifted. Bringing the user's experience to a new height is a must-do for Volvo who wants to return to the first queue of luxury brands. How does the adjustment of brand positioning affect Volvo?

From August 30 to September 5, 2011, the newspaper Automotive Research Institute and Gasgoo.com conducted surveys on the shift in the positioning of the Volvo brand. In this survey, 2,382 people from the industry participated in the voting. The results show that 38% of people believe that Volvo's brand positioning is clear and can help it achieve a certain degree of improvement in marketing. Thirty-five percent of people denied this, while another 27% did not agree, saying that it was still "not easy to say."

Brilliant and question marks The global industry is not very optimistic about the future development of Volvo's global outlook. It is still a question mark whether Volvo, which is far behind the BMW, Audi and Mercedes-Benz's top three, can continue to shine brilliantly in the past few years.

On August 23, 2011, Volvo released a brand strategy plan in Beijing. â€œPeople-centeredâ€, â€œmodern luxury experienceâ€ and â€œadvantage everywhereâ€ have become the three main demands. Its original â€œsafety, low-key, high-grade "The connotation of the brand has not been mentioned. Richard Mondino, Volvo's Vice President of Global Marketing, said, "In order to position our brand philosophy, we have even studied the furniture of the Ming Dynasty."

After being acquired by Ford, Volvo was mostly at a loss. Before its acquisition by Geely, its most recent quarterly profit was in the first quarter of 2007. The financial crisis in 2008 further exacerbated its loss. This also directly confirmed Fordâ€™s determination to sell it.

However, the domestic industry is not very optimistic about the future global development prospects of Volvo. It is still a question mark whether Volvo, which is far behind the BMW, Audi and Mercedes-Benz's top three, can continue to shine brilliantly in the past few years.

There are 30% of people who are outspoken about the pessimistic expectations of Volvo's future global development prospects. They directly say that they are â€œnot optimisticâ€; up to 37% of those who hold a wait-and-see attitude think â€œnot to sayâ€. However, in view of Volvo's market performance in the past one or two years, 33% still have optimistic expectations.

Compared with the top three of the luxury cars, Volvo missed the best luxury car development opportunity in the Chinese market in recent years. It has been opened up in terms of brand recognition, marketing system construction, product layout, and user development. The distance.

In this survey, most people feel that based on Volvo's current global performance, it is difficult to judge that it will maintain this growth momentum, especially in today's globally unstable economic conditions. In addition, the competitive landscape of the first camp of the global luxury car market has been relatively stable under the deep plowing of the three major luxury car brands in Germany. Volvo needs to fight against this situation. At the same time, after Geely's acquisition of Volvo, the integration time limit between the two parties is only one year. The collision between Chinese and foreign cultures and business concepts will continue in the future development. There are still many uncertain factors for Volvo.

Shen Hui, Senior Vice President of Volvo Global and Chairman of China, once confessed that â€œIn Sweden, Volvo is regarded as a Chinese company; in China, it is also attributed to Sino-foreign joint ventures.â€ This positioning has increased the number of Volvoâ€™s global revival trips. A lot of intangible resistance.

At the beginning of Geely's acquisition of Volvo, many analysts worried that this mature high-end brand of Volvo may be damaged, especially in the Chinese market where the original brand performance is not strong. In the survey, the Geely acquisitions in the past year accounted for only 27% of the total number of voters who had a negative impact on Volvoâ€™s brand image in China. It was thought that those who played a positive role accounted for 32%. However, the overwhelming majority of people believe that Geelyâ€™s acquisition has little impact on Volvoâ€™s brand in China. It is difficult to say whether it is positive or negative. The number of people who hold this view is as high as 41%.

Compared with the top three luxury cars, Volvo missed the best luxury car development opportunity in the Chinese market in recent years. It has been opened up in terms of brand recognition, marketing system construction, product layout, and user development. It is not only hard work that the three strong equalizing the market that wants to be as eye-catching as the Chinese market in just three or four years.

The survey results show that only 20% of people are optimistic that Volvo in China is â€œcompletely possibleâ€ to achieve â€œsurvive afterâ€ type of overtaking, but compared to 47% of people think this is â€œvery difficultâ€ and 33% The people think that based on the current market situation and Volvoâ€™s comprehensive capabilities, it is difficult to say whether this expectation can be achieved. 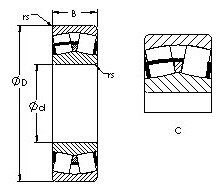 brass cages Spherical Roller Bearing have a much higher resistance to adhesive bonding, for this reason, even in harsh conditions, when lubrication is insufficient, they enable bearings to attain the design rating life. The design of Spherical Roller Bearing allows the roller rows in roller bearing to run at different speeds, thereby enabling the bearing to absorb high levels of linear deviation. Spherical roller bearings have high radial load capacity, which is especially suitable for work under the heavy load, high shock or vibration load and misaligned loads, but can't afford to pure axial load. 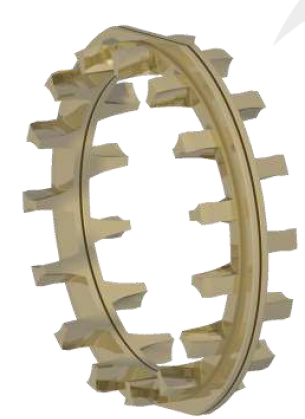 When a rolling bearing equipped with a steel cage works in condition of poor lubrication, hard contaminants might appear as a result of the adhesive wear at the cage-rolling element contact. Since sliding cannot be eliminated in the contacts between the cage and other bearing parts, the cage itself is the first component to be affected when lubrication becomes inadequate. Select a cage material able to ensure, against hardened steel and in boundary lubrication regime, reduced values for the friction coefficient as well as a very high resistance to welding. In this regard, brass proved to be the best choice.

Some spherical roller bearing variants may include perforated outer ring and oil groove features in their design to facilitate easier lubrication and further extending their longevity. with the suffix W33 or H.

Spherical roller bearing are available with heavy duty rollers and cages that are suitable for extreme demand harsh applications such as vibratory screens. Mining Conveyor Machine, and mining bulk Conveyor Pulley. In this sort of aggressive operational environment, the spherical roller bearing is the only type that delivers acceptable service life. generally have a longer life span than other bearing types. 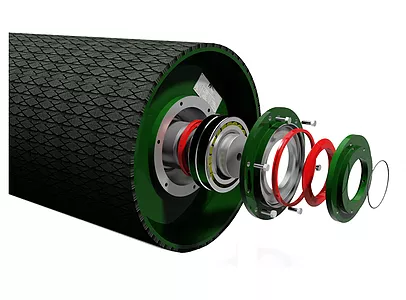 We set up a one-stop production line, committed to producing and researching supporting roller bearings and Conveyor Bearing over the years. There are many long-term fixed Senior conveyor machinery partner in domestic and abroad market. Welcome conveying machinery manufacturers` contact from all over the world